On the way to the digital enterprise: What can we learn from others – have a look at these examples

Point of view by AXXCON   It is now a foregone conclusion that digitalisation is shaking up our lives and the business world in a monumental way. While new entrants, the digital start-ups, are born with most of the traits needed to succeed in the digital era, the incumbents, the established large organisations, however, often find themselves struggling to get the right foothold, the right strategy and the entry points to reinvent themselves as market leaders in the digital era. High-speed innovation is becoming an everyday expectation, business models that may have seemed illogical or lacking benefit in the predigital era are aggressively capturing market share, revenue and profits. Digitalisation is at the top of the agenda of most of our clients. If applied correctly – digitalisation can bring a huge competitive advantage. And, without digitalisation there are lot of more risks your company is facing with. For example, market leaders can lose their position as typical services can suddenly be disrupted very simply by digital solutions. Enterprises that refuse to adapt to the digital age are endangering their own future. To become digital is not only an opportunity to get ready for the future. It’s much more. It is a Must-Have on your To-Do-List. But note, that it doesn’t make sense to develop great paperwork without looking around. Therefore we show you some famous examples, what can happen to late adopters or if you don’t react at all. Two well-known enterprises – once global market leaders – did not become digital in time and have therefore been crushed by their digital competitors.

Kodak invented the first digital camera in 1975 – 15 years before the company’s competitors entered the game. The developer of the first digital camera, Steven Jasson, told the New York Times in an interview that his bosses were not impressed by his invention; he added: ‘They [his bosses] were convinced that no-one would ever want to look at their pictures on a television set. This did not stop Jasson from developing the first DSLR (digital single-lens reflex camera) in 1989, which already used memory cards. But this time Kodak’s marketing department stopped further progress, in fear of product cannibalisation. At this point, the digital transformation could not be stopped, and the first digital cameras hit the shelves in 1989 (DS-X by Fuji). While the first products were not able to compete on quality with analogue cameras, their quality increased drastically over the next few years and soon reached levels comparable to analogue cameras. Kodak believed in analogue photography for too long. Even though they had digital technology in their hands, they primarily promoted their analogue products, while their competitors were already growing with digital products. Finally, in 2001 analogue photo cameras experienced a huge drop in sales. Kodak blamed it on 9/11, neglecting to consider that its market had transformed. Contrary to Kodak’s belief, the analogue market did not recover, and Kodak’s downfall could not be stopped. The main reason why Kodak saw a very slow decline over a decade, rather than a rapid death, was its patent portfolio. Luckily, several Kodak patents were related to the core components of digital cameras, thus patent royalties generated a steady income for Kodak. But Kodak was not able to develop successful digital products and services in the meantime. Thus, once the patents ended, Kodak lost an important income source. Even though Kodak had money and time, it was not possible for it to re-enter the market it had lost to its digital competitors. When Kodak finally entered the digital photography market with competitive cameras for consumers and started marketing its digital products, the market was already shifting to the next big thing – smartphones with integrated cameras. At this point, Kodak soon went bankrupt.

Nokia is another good example of failed adoption of digitalisation. Nokia was the first company to introduce a mass-produced GSM phone to the market (1992). The company was able to leverage its momentum and overtake Motorola in 1998 to become the global leader in mobile phones, and held that position for over a decade, from 1998 to 2011. At its peak, in 1999, Nokia was the largest European company by market capitalisation. Despite also being the market leader in smartphones prior to the iPhone’s release, Nokia focused on the efficiency of its production process. Due to the large number of devices sold, Nokia feared making changes to its products. These were bad decisions that would have a high impact on Nokia’s continued business growth. New players such as Apple seemed to be insignificant at the beginning, because the number of smartphones sold was tiny in comparison to Nokia’s success. But the tides turned when the first iPhone hit the market and started the shift from mobile phones towards smartphones. Nokia failed to adapt in time and lost over 90% of its value within five years. It started desperate moves to stop the death spiral and was forced to drop its own mobile operating system (Symbian), which was a reason for its poor competitiveness. But in the end, it was not enough: Nokia sold its entire mobile phone business to Microsoft in 2014. Nokia was not able to compete with the new technology and reacted slowly after the damage had already been done. Its fear of damaging its current revenues denied Nokia the ability to adopt new trends on time.

What can we learn – or how to avoid critical mistakes in the digital era?

So now, what can we learn from those cases? Reflecting our experience and successful digitalisation projects, the following three mistakes were made – and are still relevant for our clients nowadays: First, large enterprises have enormous inertia. They must be careful that traditional business units with large sales, profit numbers and political power don’t overshadow innovative projects and business units. New business areas cannot compete with successful existing business areas but are forced to do so. Traditional areas of focus within strategic meetings are reporting high sales numbers and high profit margins, while new areas cannot stand on their feet at the beginning. As seen at Nokia, the dominance of their mobile phone market denied the company any potential leaps into a smartphone future. It invested its operational focus on maintaining its current business and was not able to adapt to the smartphone trend. Second, fear of cannibalisation is another major block for companies seeking to become digital. Enterprises must carefully transform their business portfolio step by step and allow new business models to replace their cash cows. Kodak earned money at every step of the analogue photography process. It is understandable why it feared digital photography, because it threatened to ruin the whole value chain of its traditional business. Kodak did not want to hurt its analogue photography cash cow as long as it was highly profitable. However, progress cannot be stopped so easily. Companies therefore must find a way to mitigate the losses in their traditional business and grow into leaders in the digital world. In the end, Kodak’s fear of endangering its then current business led to the company’s bankruptcy. Third, innovation cycles, especially in the digital arena, are not linear. A good example is Moore’s law, which describes how the number of transistors in integrated circuits (i.e. CPUs or central processing units) doubles every second year. Thus, innovations that may seem possible only in the distant future can happen much earlier due to rapid technological advances. Enterprises must not wait until they are forced to catch up, because the exponential learning curve is very steep once a company has fallen behind its competitors.

In our opinion, these are the most important points you should keep in mind

Technological advancements are some of the key drivers of digitalisation. Digital technologies are changing the behavior of the customers, the nature of products and services, B2B collaboration, and competitive landscapes. Also the technologies that enable digitalisation are advancing rapidly. Very rapidly. This intensifies the urgency of digital transformation and adoption of applicable technologies even more. In our view, it is therefore imperative that any enterprise, eager for successful digital transformation, first needs to create a strong sense of urgency and use it to firmly drive the transformation process. This way it can rapidly acquire the required skills and capabilities and bulldoze the common roadblocks to change, such as organisational inertia and fear of uncertainty. Simply adding digital frills to the external façade of an enterprise or creating a few mobile apps cannot deliver the full benefit of digitalisation. Appropriate changes must be made right down to the core activities of the enterprise – in the way it creates strategies, makes investments, improves and automates both front-end and back-end business processes, produces and markets products and services, and manages customer relations. Digitalisation is not a small change but a major leap in organisational thinking, culture and behavior. The task of digital transformation may seem daunting at first, but strong leadership commitment and the use of proven adoption frameworks can ease the transformation pain.   We can recommend reading the “Digital Cookbook” on your way to become a digital company. AXXCON contributed two chapters. Learn more about it >

LEARN MORE ABOUT IT

SEND US AN EMAIL: 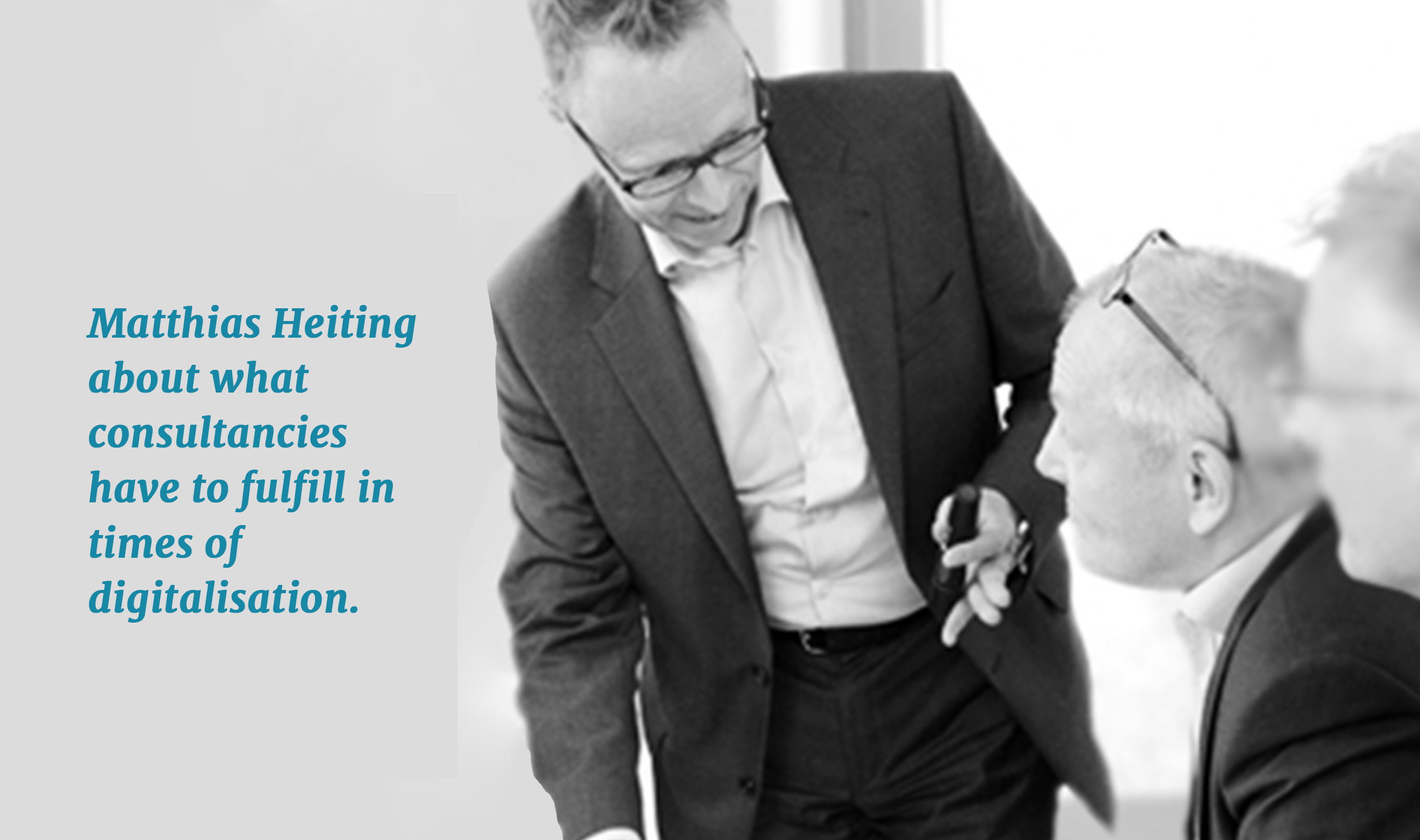 What does digital transformation actually mean?

When is digital Business-Transformation necessary and how can organisations benefit from external support through consultancies?

For several years there has been a demographic change that we call digital transformation. Changes that we experience through digitalisation affect all areas of life: living environments, the state, economy, working live, research and development, education, art as well as media. Everything changes or needs to change even our safety. Which questions will become relevant now?

By continuing to use the site, you agree to the use of cookies. More about our privacy